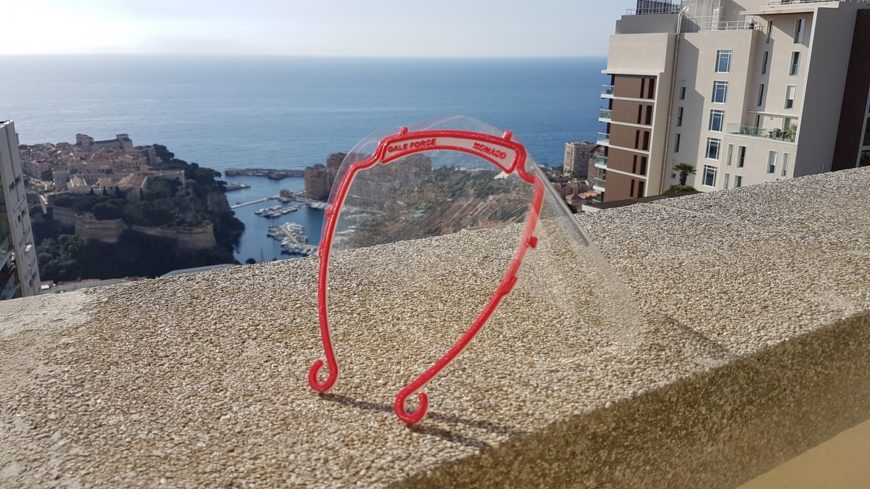 I started to be concerned about Covid19 in mid March when I realised we would soon have to go outside to buy food. As we live in an apartment block my first thoughts, rightly or wrongly, were the risks of touching buttons in the lift. So I designed and 3D printed a small pointer thing with a protective cover. It is now known as the Safe Pointer.

I even made a little Demo Video to explain it.

After showing the Safe Pointer on Facebook my mate Wendy pointed me to an article about a local guy printing face visors. I did try to contact him but never had a reply so I did some research on the internet and found all sorts of designs. I experimented with a few, found one I liked then added my own customisations.

I didn’t really have a plan so I put my visor on Facebook. I thought if there was any interest I would give them away to healthcare workers/charities and ask for donations from companies. To make them look a little more industrial I printed a 3D ‘GALE FORCE Monaco’ name to each one.

A few days later, at the start of April, I was contacted by a friend who was interested in my visors. His boss was head of a social support organisation for the Monaco Police department. We had a chat and I started printing. While handing them out I also posted pictures of each shipment on Facebook and Instagram. This raised more interest in my local community. Soon all sorts of people were interested and visors were flying out of the door literally as fast as my two 3D printers could make them.

The more visors I shipped the more creative I became with the photos posted. I even enlisted the Cat as background and was up really early one day to photograph the visors at sunrise!

I was even asked to make a short video about how I made them.

For even more fun I made a few ‘Limited Run Collectors Editions’ in the red and white of the Monaco flag which I randomly included in the shipments.

As April came to a close face masks were becoming a thing so I started to look at 3D printing them. After some experiments I decided I didn’t really have the patience for these. The Safe Pointer and Visors were taking about 1 hour to print each one, the face masks were more like 5 hours each. I made a couple for us but was never really happy with the way the hard plastic seals against the face. I did like making crazy designs though.

To this point everything had been printed with hard plastic PLA or ABS. Now I bought some flexible TPU which allowed me to experiment with designing and printing head straps and a better seal layer. Still I was not happy with the quality but they are fine for our private use.

A few days later, at the end of April, our daughter Kim came up with another product to look at. It seems many people were now using cloth face masks with elastic straps around the ears. Two problems were apparent: the straps were too long for children and they were very uncomfortable on the ears of people who had to wear them all day. So I researched and experimented with ‘Ear Protectors’. Once I had completed a design I liked they were added to my Product Catalog in Standard, Large and Child sizes. Once again I made some red and white Monaco flag ‘Collectors Versions’.

Throughout May I was busy producing Safe Pointers, Visors and Ear Protectors to order for all sorts of people from Yacht Brokers and School Kids to Dentists and Nurses not forgetting Security Guards, Fire Wardens and a whole load of office workers.

In total I made and distributed 40 Safe Pointers, 386 Visors and 240 Ear Protectors. Almost 740 items and importantly I had a very satisfying time doing it.

As expected the work tailed off as June started and now life is pretty much back to normal. Today I am back to designing and printing Dragons and Oddities for companies.