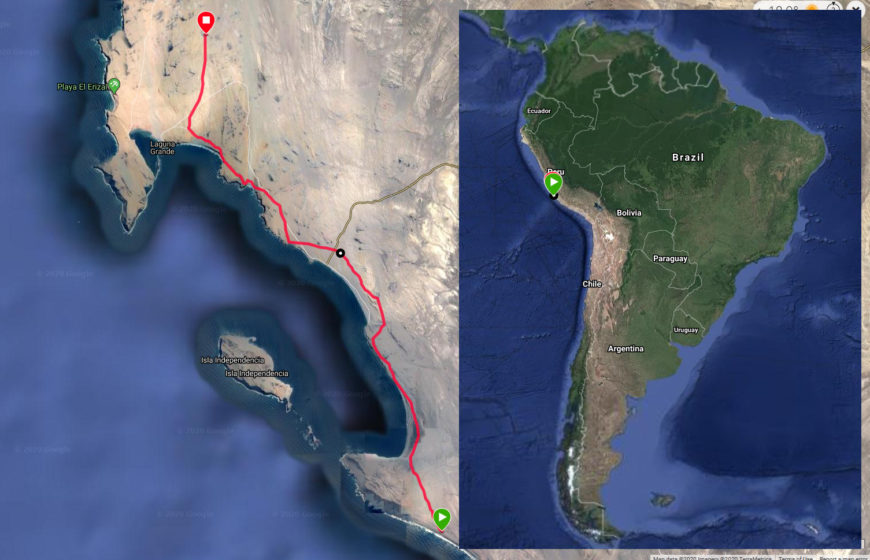 On 3 December 2017 in Southern Peru I ran my most enjoyable marathon ever. Needless to say it was a bit unusual. I have done loads of marathons from big city to desert to Ironman and this one was the daddy of them all. (You may click the photographs to revel in their details)

This marathon started on a Pacific ocean beach called Playa Barlovento [See on Google Maps] (I only just found out it had a name!) about 300km south of Lima and about 70km west of the nearest settlement (Ica). This was day 6 and stage 5 of the 2017 Marathon des Sables in Peru.

0km: Here I am with about 220 other runners gathered on the beach that morning. We were all that remained of the 300+ runners who had started the MDS 5 days earlier. 182km of desert running carrying all our own equipment and food had taken its toll.

On the first 3 days we had covered between 33 and 43km per day. The 4th day had been a 68km stage which I finished at 4am in the morning on this very beach.

The good news was that the 5th day (yesterday) had been a day off from running. We all lazed around, chatted and paddled in the Pacific Ocean. The even better news was that having eaten 5 days of food my backpack now seemed to weigh almost nothing compared with a few days earlier.

The bad news was that I had a 2cm diameter hole in the bottom of my left foot after a super sticky blister patch took my skin with it on the way off. Walking was a pain, jogging was a little better.

It was yet another nice, sunny, cloudless day in Peru as the starting horn went and off we all trotted. The first 3.5km were a steady climb off the beach and up 230m to a col. The steady gradient quickly spread us out into one long line.

3.5km: The view from the top of the col was so amazing I decided there and then to photograph the route as much as running it. Here you can see the next 1.5km which was a magnificent downhill funnel back to sea level.

5.5km: The bay was 4km wide, totally flat and a little damp in places. Note the large rock bottom right and the small group of runners heading for it. Even out here toilet manners are still important.

9km: Looking back across the bay you can clearly see the funnel we had just descended and, on the right, the serious looking mountain we had avoided. The two vehicles on the left are the medical teams keeping a close eye on us. Please note that even though it will be my 61st birthday in a few weeks I am still not last ! By now we have covered 9km and it has taken me 1h 35m.

9km: Looking forward from the same location you can see we are following the coast and heading into a field of medium sized sand dunes. The course is marked now and again by rocks sprayed pink so we know where to go (on far right of photo) – no foot paths or trails out here.

13km: After 4km of dodging dunes the route turns slightly East away from the ocean and into the rocky hills. In the next 2km we climb back up to 200m above sea level. I am doing a slow jog and overtaking people as I go.

15km: At the top of a 200m high ridge I can see my future. I have already passed the people in the last photo and now see a big gap to the next group – those tiny black dots. The route is taking us to the gap in the next ridge on the far right of the photo.

17km: Downhills are fun and I quickly catch up to the next group just as the ground suddenly drops away. This was a seriously steep step as you can see from the two people in front.

17km: Before I drop down the step I looked back. You can clearly see on the horizon on the right, the mountain we had come around and that first downhill to the bay. The course then took us way off to the left further than the photo which is where the other runners are catching me up again.

17km: I turn slightly to the left and there they are coming on strongly. In the dip you can just about see another medical team forever watching.

19km: This is lovely desert running – a gently descending firm sand kilometer to the 20km aid station in the distance. Off to the right you can just see the black dots of runners leaving the station. At the aid station I pick up 2 bottles of water to power me through the next section.

To be honest these Water Station photos are from a previous day but I felt they were worth including here. On the left you can see the tripods for the timing sensor gear, next are the crew’s 4×4’s, next is water tent, next is the “shade” tent and finally the medical tent on the far right. I use the word “tent” very loosely. On the far right you can see someone off on the next 20km.

She was kind enough to take my camera for a quick photo as I zoomed into the station.

The lady on the left writes my number down, presumably in case the Timing Computer packs up. The guy on the right writes my number on the bottles and the tops he is about to give me. This is to ensure any rubbish found on track can be traced back to the owner! The guy in the middle watches closely to make sure I don’t need medical attention – seriously. In Morocco I saw a guy get his bottles then pass out flat on the floor 10m later.

26km: Up another enormous 220m high hill and another view into the future. I know I am on the right track because of the pink rock at my feet, but strangely cannot see anyone in front. In the far distance on the right you can see the black dot of a medical team. Turns out there is another bay crossing between me and the medical car that I cannot yet see.

28km: OK now I see the next bay and some runners in front of me. You can just see the medical team near the top of the hill on the other side of the bay.

29km: This is a sea level view of one of the scariest hills I have ever climbed. I know it doesn’t look much on the photo but it was like a wall. It went up 130m in 400m of distance but the scary part was the exposure. If I slipped it would be a one way trip to the bottom. No vegetation or anything to slow a descent. Luckily it was all hard packed sand although with a slight hint of slipperiness.

29km: The view back before I tackle “the wall”. You can see the runners behind me descending the hill in the distance.

29.5km: A very relieved view back from the top of “the wall”. Yes there are runners down there somewhere. I think the feature on the very far right of the horizon is probably about where I started nearly 5 hours ago.

32km: Normally at this distance on a marathon I am well into counting down the km’s to the end. This one however just keeps on giving. In this section the route goes so close to the cliff edge that I make a little detour 20m inland to avoid the worrying looking cracks in the ground. 5m long by 20cm wide – these were more like crevasses. It looks like more cliff is ready to fall at any moment. On the plus side I see a group of massive Condors swooping around a nearby dune. You can see the next pink rock on the right and the dots of runners in the distance.

35km: I pass by the final bay of the route, amazingly without having to actually cross it at sea level. The route stays a sensible 50m up and skirts around the back of the bay. I am sure you have noticed the two structures on the beach. Don’t know where my head was but at first sight they looked to me like some things had landed from Star Wars. With a little more concentration I realised they were fishermen’s houses made from all sorts of odd stuff that had presumably washed up from the ocean. No signs of any people. I think these were the first non race man-made structures I had seen for a week.

38km: By now I am feeling great, just 4km left, the sand is fantastic and my pace is between 6 and 7 minutes per km. I am on fire. In this photo I can almost see the finish line in the far distance. A pink rock can been seen just in front, a runner on the left and more further away on the right.

42km: Well all good things come to an end. Stage 5, and this story, are no exception. 6 hours 55 minutes after starting I crossed the finish line of the best marathon I have ever done. For me that’s about 2 hours slower than an Ironman marathon (after sitting for 180km on a bike) and 3 hours slower than a city marathon, but on this day in this place none of that was important.

It was brilliant, brilliant, brilliant. The route, the weather, the challenges, today had it all. 42km with 1,060m of climbing – job done – super happy. Just a 20km jog tomorrow then I can collect my second Marathon des Sables Finishers’ medal of 2017 🙂

When I finally arrived home I was super happy to discover that my daughter, Kim, had recorded my Stage 5 finish from the official live video feed of the day. (Note that I did the aeroplane thing at the finish for fun rather than having a problem with my balance which is sort of what it looks like.)

Thank you for reading. I hope you enjoyed it.