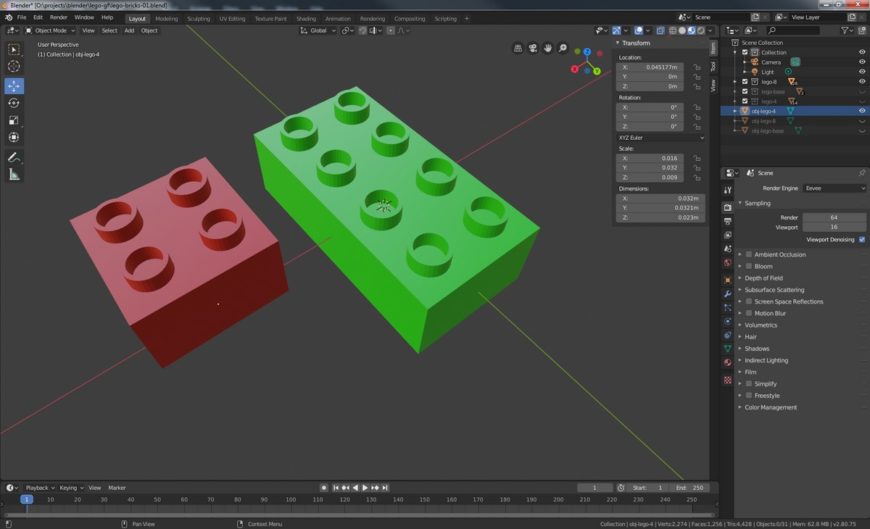 Several people have asked me how I made my little Lego Movie. Well it’s something I had been kicking around for ages and finally the 2020 Covid lock down gave me some time to really tinker with it. So how did I do it ?

Well the first thing I did was arrange a load of my Granddaughter’s Lego (actually Lego Duplo as she is really little) on a table with a load of nicely spaced metal washers. I then made a 4k video panning over the table with my trusty Sony AX53. Below is a short extract from the video:

I then imported the video into my Blender 3D program. This is the magnificent software tool that I use for all things 3D from animations and visual effects to building dragons for my 3D printers.

I used the AI in Blender to analyse the video and reverse engineer how my camera was moving in 3D space. The metal washers on the table were used as key points for the AI to track. Below you can see the tracking screen in action. The squiggly lines are the AI’s attempt to understand how each point moves within each frame.

I now needed some virtual Lego for my virtual world. Luckily, for another project, I had already made the models of the Lego bricks:

Next I had to think of something the Lego could do. Two 8 bricks heading a 4 brick between them immediately came to mind. I added in a few background bricks then spent quite an amount of time working on the animation to make it look like they were playing a heading game. I recorded “the sound of two bricks colliding” to complete the effect. The video below shows the base animation in progress.

With the brick movements all programmed I rendered the animation from the point of view of the moving camera from the AI resolve. Once the original video was added as the background it was time to work on the lighting to give my virtual bricks the same look as the real ones.

I was very pleased with the effect but I still needed some GALE FORCE customisation otherwise people might just think I copied it from the Internet. After several attempts I eventually built an entire GALE FORCE with scaled down bricks. Once I flew them into the scene I used the Blender Physical Dynamics system to animate with gravity and brought it to life with the sound of “dropping bricks on the floor”. I loved it so much I repeated the sequence in slow motion.

I hope you enjoy it.