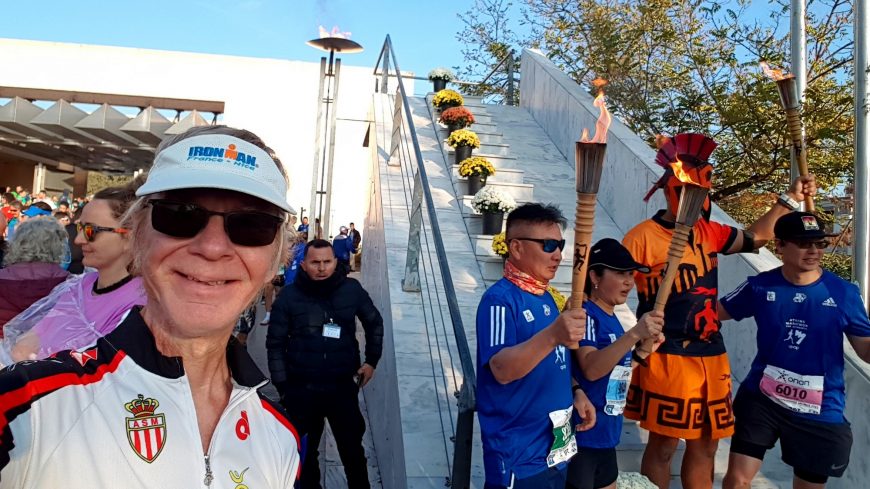 For many years the iconic Athens Marathon, from Marathon to Athens, was always on the same weekend as my local Nice-Cannes marathon. As I have a 100% record of finishing every edition of Nice-Cannes I could hardly skip one just for Athens. Luckily, for some reason, in 2022 Nice-Cannes was two weeks earlier. This was my chance. I immediately started searching for the Athens Marathon registration.

Compared to many of my “fly away” races this one turned out to be super easy. When I first searched for the race I fell upon athensmarathon.com. While not actually being the official site it did turn out to be a Greek/American tour operator that has been deeply involved in the Athens marathon since 1994. Their official name is Apostolos Greek Tours Inc and they offered 100% full service 6 or 12 day packages for marathon plus touristing. Being British I thought spending some time in the company of Americans would be fun so we signed up for the 6 day.

We landed in Athens on the Wednesday afternoon before the race and were met by Christiana who took us to our hotel where we met our host, Paul. We spent Thursday in Athens on the big red bus tour and met up with the Americans for the orientation meeting in the early evening. Really nice people. From California to Texas to Wyoming to Vegas to Ohio and New York we heard just about every accent from every TV show we had ever seen. It was brilliant.

Friday was an organised trip to the race finish area at the Panathenaic Stadium in Athens followed by a tour of the Acropolis, lunch and the marathon expo to collect our race numbers.

Saturday was a coach trip to the Temple of Poseidon at Sounion, lunch, race briefing and Pasta Party. At the briefing I chatted with Chris the resident marathon guru. He works as a trainer for the Jeff Galloway company so much of our conversation was around Jeff’s Run-Walk-Run marathon method. I gave it a go on the day – watch the video to see how I got on.

Sunday was an early breakfast followed by a coach ride to the race start in Marathon. It turned out to be a tough race with over 3 times (337m) as much climbing as my Nice-Cannes two weeks earlier. I wasn’t very impressed with my time, but still very happy to finish and collect my 26th marathon finishers medal. See the video below for the full story and a surprising amount of on course chat. In the evening we had a Gala dinner celebration with a DJ and real Greek dancers.

Amazingly for the day after a marathon, on the Monday, we were once again out touristing, this time in the Ancient Agora of Athens. See video 2 below.

Tuesday was another early breakfast as we had a tour boat scheduled to start at a local marina at 7am. The boat took us to the islands of Idra, Poros and Egina before returning in the dark. Fantastic day – see video 2 below.

On Wednesday we were back at Athens airport to fly home for some well earned rest (ha, ha).

I had taken my GoPro camera on the Nice-Cannes to try to make an inside the race type of video. I was quite pleased with the result, but not so happy with the camera. It was a GoPro Hero 4 which could film in 4k, but did not have image stabilisation. For Athens I decided to take my 360 camera the GoPro Max. It has much better image stabilisation, but unfortunately in Hero (non 360) mode it can only record at 1080p.

For some reason I didn’t film anything much for the first few days of the trip. I did film my entire marathon and the two days of “being a tourist” afterwards. These I eventually split into two YouTube videos: 1) The Race and 2) The Tourist. I hope you enjoy them.