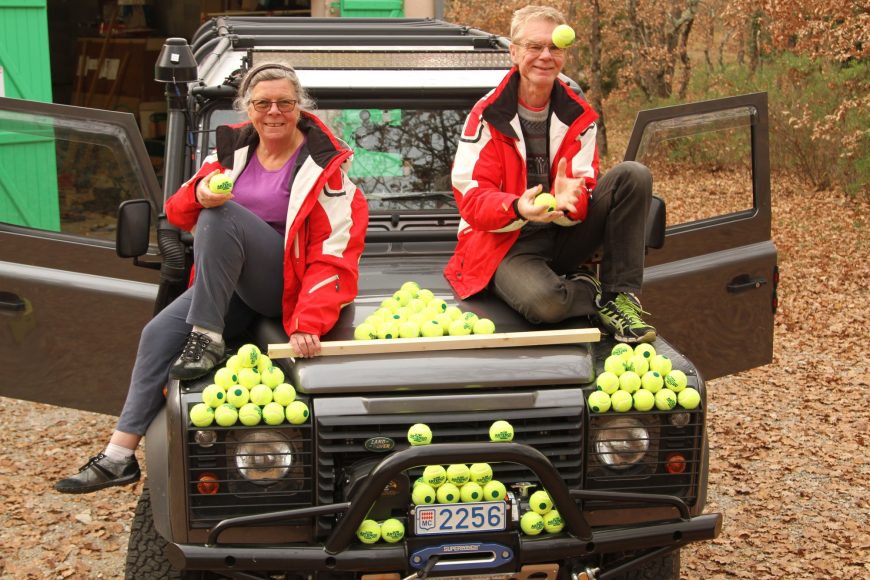 In 2022 the Moroccan national football team became the first African team to play in the semi final round of the Men’s Football World Cup. I would like to believe that we helped them along the way either to this World Cup or subsequent ones.

Back in 2016, Penny, my wife, and I were just starting to explore Morocco in our Land Rover Defender 4×4. Our first ever trip was with a French group on their Defender Trophy event. It was quite clear from day one that we would be seeing the real Morocco and none of the tourist highlights. We toured mountains, forests and a lot of sand dunes passing through many small communities and a few farms. We drank tea with real Moroccan people in real Moroccan houses made from straw and mud. It was a massive eye opener.

There was a humanitarian aid feel to our trip. In the notes we had been asked to bring all sorts of items to give to the people we visited. These included candles, soap, pens, matches. Things that in our normal world had little significance. We were not in our normal world.

We were back in Morocco later in 2016 this time by aeroplane to take part in a 4×4 training course with ex-world champion rock climber turned desert racer Isabelle Patissier. Again much time was spent in the desert with the evenings spent in small auberges in tiny Moroccan communities.

All this made me think about life in the real Morocco and especially the life of children growing up. Next trip I wanted to take something for them – but what. I quickly decided that footballs would be the ideal gift. Boys and girls can play with them anywhere, alone or in groups, with or without shoes.

Unfortunately, for us, footballs had 2 major draw backs. They were big so we couldn’t carry many. They could be damaged on the rocks which, I think, would really upset any keen children. Obviously they would have no access to repair and re inflation facilities. Then it came to me.

Tennis Balls! Small, very rugged, easy to play with. They can throw them, bounce them, catch them and, for a real challenge play football with them (like I used to do at school some 50 years ago).

As soon as Penny approved my idea my brain went into overdrive. We could call it “Balls to Africa”, we could setup collection points for old tennis balls in our local tennis clubs. I could build an air cannon to shoot the balls towards the children as we drove through the communities. Well, as you imagine, Penny banned the name and the air cannon. We did contact some local tennis clubs, but no one was interested in helping.

We had more success with our friend at our local sports mega shop. He offered to give us a big discount on brand new tennis balls. Unfortunately he was unable to officially sponsor us so we could not mention the name of the company in our attempts to gather more balls.

In 2017 we took part in the 2 week long 6,000km Africa Eco Race RAID event from Monaco to Dakar in Senegal. The trip took us through Morocco, Western Sahara, Mauritania and into Senegal. We gave out tennis balls to children at every opportunity.

Two months later we were back in Morocco handing out more tennis balls during our 5 week, 3 event, stay. First up was the Carta Rally Offroad GPS 4×4 Challenge then I ran the 250km 7 day Marathon des Sables desert foot race. and finally we took part in the 2017 Defender Trophy event with our friends from the previous year.

My notes show we gave away 550 tennis balls during these trips. Mostly we were handing them out to children who would gather at the side of the track as 4×4 cars went by. I remember in one village we were invited to visit the local school, we drank tea with their equivalent of the mayor and donated them a complete bag of 50 tennis balls. It made for a very interesting and rewarding side line to our adventures.

So in summary we would like to think that 6 years ago some of these 550 balls encouraged a few children to play football. Of these children we hope that some discovered they had the talent of ball control and went on to play professionally. In our wildest dreams we hope one or more of these children are now representing their country on football’s biggest stage. From kicking a tennis ball in the desert to the World Cup – could it be possible – one can dream.