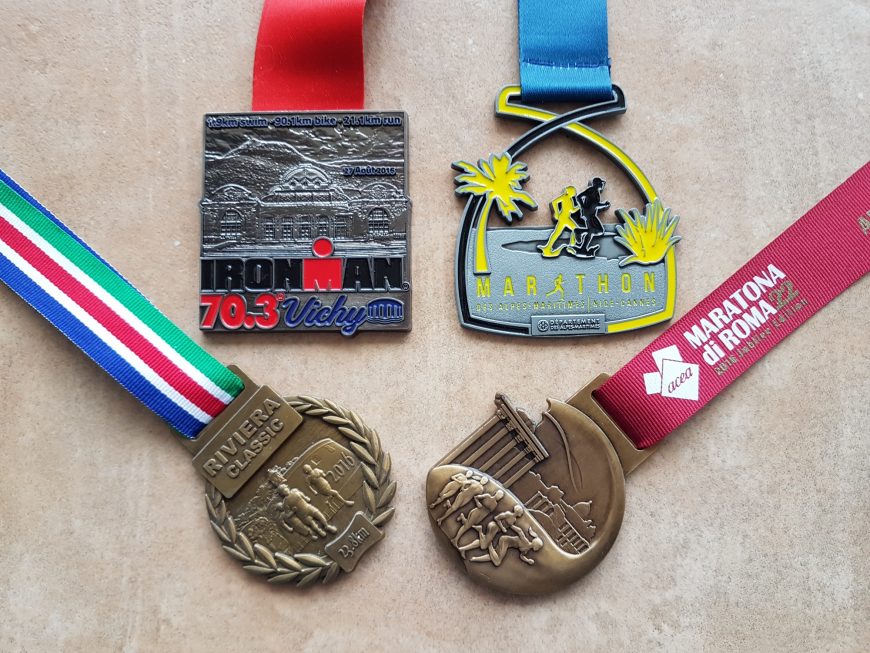 After all my neck problems and missing sport in 2015 this year started off in recovery mode.

I think the first race was the Cannes Semi marathon (21km). I was very upset when I discovered there was no finishers medal. Next up was the Rome marathon (42km). This was a bit of a late entry as I was still testing my neck limits after my December 2015 operation.

I was still happy at the 23km Riviera Classic run from Italy to Monaco so I signed up for the Vichy Ironman 70.3.

The Vichy 70.3 was almost a disaster as, at the last minute, they decided the water was too hot for wetsuits. Panic now as I could not swim freestyle without the suit because my legs sink. I jumped in the water without a plan and ended up swimming the 1.9km breast stroke. At least I could see where I was going for once. Just squeezed in under the cut-off time. The 90km bike was OK despite my lack of training since 2014. The 21km run was a grind but I just managed to finish within the cut-off time and picked up my first IM finishers medal since 2014.

In September I did the local Roquebrune Sprint triathlon.

The year ended with my 9th Nice to Cannes marathon (42km)