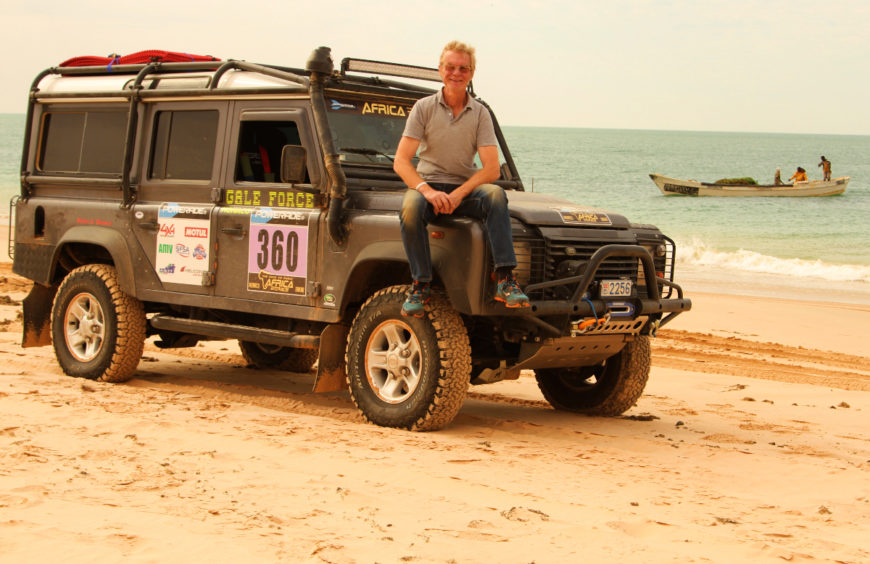 In 2017 my wife and I took our Land Rover Defender on the Africa Eco Race RAID from Monaco to Dakar in Senegal. This annual event was started in 2009 after the famous Paris-Dakar rally moved to South America. Truly it is an all out off road race covering over 6,500km of amazing terrain in two weeks of daily stages. Luckily for us there is also a RAID category which covers roughly the same route, but without having to actually race.

I have many, many stories to tell about these two weeks, but for this article I just wanted to cover some of the movies I made. As we were driving continuously every day there was no opportunity to do any sort of out of the car filming. My solution for this was to keep all the footage from our Dashcam and see what could be done with it once we were back home.

For this first one I did try to make a sort of travelog thing using my phone. By the time we reached the first bivouac though I was knackered, so it didn’t actually progress after that.

On disk I have the Dashcam footage for the entire two weeks, but for some reason I only made music videos from Stage 10 and Stage 11. Both of these were in Mauritania and some sand was involved.

Stage 10 started at the crack of dawn, the time on the Dashcam is still France time which is one hour ahead of Mauritania. The standout moment of Stage 10 was the dunes’ section. Strangely enough our son Chris was actually driving the dunes, his first ever, (he was having a day off from his usual AER Support role) and his over enthusiasm eventually left us stuck axle deep in sand. Actually he was not the only one who stuck as several others were also caught out by a sudden patch of soft sand.

In practice it was not a big deal as you can see there were plenty of others around to give “helpful advice” and even help itself.

Here is the actual video complete with some dunes driving sound effects by Chris !

The Stage 11 movie actually starts from right outside the breakfast tent at about 7h30. The trip through the bivouac gives you an idea of the size of our camp. Early on there is an epic shot of being overtaken by one of our helicopters heading into the sun. As my wife and I were pretty much on our own we were really careful in the dunes section to avoid risking becoming stuck ! Once through the dunes though it was flat and fast to the end with speeds touching 120kph.

Even though we were over 100km from the coast the ground in this part of Mauritania is made of sea shells ! (You can click the photograph below to see the details)

At one point we ended up driving along the beach in Mauritania as the tide was coming in. Don’t ask how a North to South rally had us going this direction on an Atlantic beach ! Anyhow the last thing we expected to see was two way traffic . . . .

At the end of the event all the cars go onto a boat in Dakar and slowly work their way back to France. We holidayed for a few days taking in some of the sights of Dakar and the surrounding area. One of our holiday highlights was a trip to the Animal Reserve de Bandia just south of Dakar. At home I cut some of my animal film from the Reserve with some car stuff to make the following.