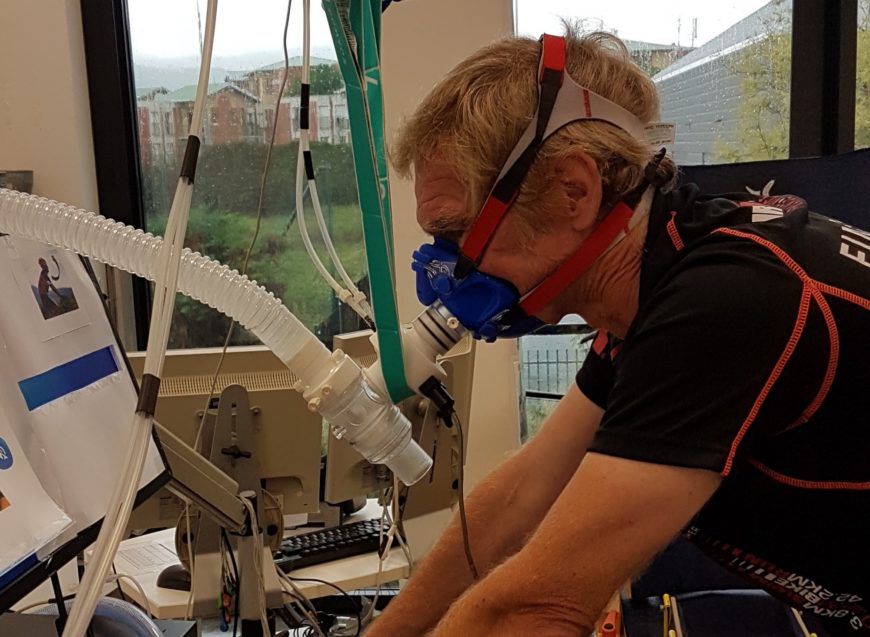 In 2019 I spent a few days at the Faculte des Sciences du Sport (STAPS), Universite of Nice having my breathing researched. Or as I called it “Hunting the Perfect Shoe Shape”. The study was a PhD project to investigate the breathing parameters of older (60+) people before, during and after exercise.

The actualy study of breathing is called Spirometry and is all about the volume of air you breathe and how fast you can move it in and out.

My first session was spent mostly learning the protocol and the equipment. The steps for a successful cycle are: totally fill your lungs, breathe it all out as fast as possible then fill your lungs again. Actually not as easy as it sounds especially with a measuring thing bolted onto your face.

Most of my first session was spent just sitting in a chair trying to make this cycle repeatable without the sensor mask and then with the mask on.

As you can see from the image above it makes a sort of shoe shaped pattern, some were better than others, thus we were hunting the perfect shoe shape. Many of mine were a bit out especially at the start.

The action begins on the zero line at the far left. As soon as I had completely filled my lungs they pressed the button and the trace started. As I breathed out the trace goes up, showing the rate in litres per second of air going out, as well as moving right showing how many litres I had expelled. As you can see I have a steep rise at first then the rate tapers off as my lungs empty.

At about 5 litres I am totally empty, hold it for a moment then start the inhalation phase which shows as the trace back to the left below the zero line. Eventually I am full again and the trace is back to zero on the left. Simple.

The data on the right shows how well each cycle went. Mes is my result, Pred is the predicted amount based on my age etc and %M/P shows where I am actually against the predicted.

VEMS is the volume I can exhale in 1 second.

VEMS/CVF is the ratio between full volume and 1 second of expiration.

Unfortunately I have forgotten what all the other numbers mean….

Once I had cracked breathing the real work began on the bike. First it was a 10 minute warm up while we chatted about the world and they setup the air supply. As this is a real scientific test I could not just be breathing any air, it had to be calibrated air. The air in question was contained in a massive blown up bubble with water in the bottom to make sure the humidity was the same each time. Expelled air went out into the real world so we didn’t have to worry about that.

Once I was warmed up and plugged in to the correct air we were ready to go. First off were a few breathing cycles while not cycling. Once that was done I was set off on a 5km as fast as I could time trial. Then each minute, while still cycling as fast as I could, we measured a full breath cycle. I finished in about 8 minutes then did a full breath cycle before recovery started. During recovery, well just sitting around really, I did a couple of breath cycles every 3 minutes for 15 minutes. Phew, time for a shower.

So that’s how it went. I did 4 days at STAPS, each time running through the same excercise and making lots of nice data for them. I think there were about 20 of us guinea pigs for the tests which I guess were eventually all rolled together into a report somewhere.