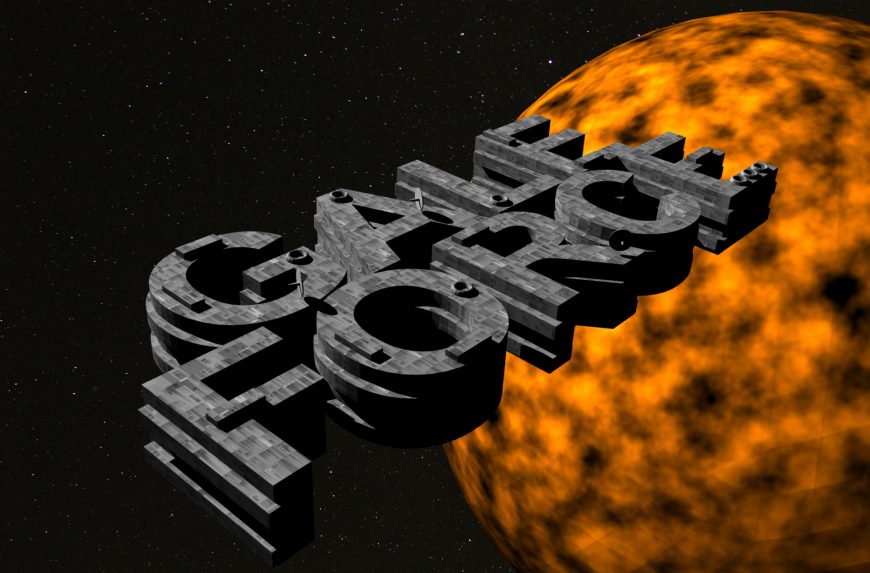 I recently came across some of my really old Computer Animation Videos which I think warrant a story.

Building my own computer business in the late 80’s gave me a great deal of latitude about which services to offer. I started the business by writing custom accounting systems for local shipping and manufacturing companies. This quickly evolved into all types of billing and reporting systems.

A natural extension of this became the sales, installation and maintenance of PC’s, printers and eventually networks and servers. This was more than I could handle alone so I hired employees. Before I knew it I, an engineer, had a real business.

To build up the business in the early 90’s I experimented with all sorts of services. Including:

But I digress. Early on in this adventure I discovered that, amazingly, a local conference centre hosted an annual world class computer graphics conference called Imagina. I started attending. At first I was actually paying for my entry like a normal person. In later years I acquired Press accreditation through a friend. When I started the internet in Monaco I became a supplier of internet bandwidth to Imagina and went on to create and host the official website of the parent event the Monte-Carlo Television Festival.

For me, Imagina was a massive eye opener into the fields of data visualisation and computer graphics. Remember this was a few years before Toy Story (1995) would take computer animation mainstream. Much of the conference was taken up with research papers (think motion capture, image recognition, augmented reality, virtual reality) from universities and specialist schools such as SupInfoCom. The last day of the conference was always dedicated to movies and special effects. This usually included presentations by some of the best in the world. I made a special effort to ask them some sort of inane question at the end so I could say I talked with them. Over the years my personal stars included: John Dykstra (ILM), John Lasseter (Toy Story), Stan Winston (Jurassic Park, Terminator) and John Knoll (ILM). I had a longer chat with a Star Trek guy, whose name I unfortunately don’t remember. For me he was a star as he had created all the Holodeck sequences in Star Trek TNG.

I have collected lots of documentation and notes from Imagina over the years. The following is a slide show of the IMAGINA Conference Book Contents List from 1995. It is a 327 page long book that covers all the details for all the conference sessions. Take a close look at the photos to see exactly what subjects we were discussing in 1995.

It seems many of the subjects are still relevant today. The 11 presentations in Sessions 1 and 2 are really “The Metaverse”. Session 3 covers such subjects as Virtual Democracy, TV Streaming and Crypto Anarchy. Remember this is 1995 when very few people had Internet access and those who had were using 9.6kb dial-in modems. The 7 presentations in Session 4 were basically computer games and covered such subjects as Interactive Movies and the application of military tech in consumer games. Session 5 was all about Virtual Reality and Augmented Reality – even today (2022) still a Work In Progress. As I mentioned, the Visual Effects Session 6 was always my favourite. In 1995 the highlights were “Virtual Actors”, Digital Domain showing their work on “True Lies” and ILM showing their work on “The Mask” and “Forest Gump”.

Ahead of the Curve

So as you can see, I was in the right place at the right time to understand how Computer Graphics were going to change the world.

Unfortunately I was in the wrong place to make any commercial use of my new found knowledge. In 1993, before I knew this I bought the 3D Studio program from Autodesk and began learning. As you can see from the photo below I still have it.

My creative imagination ran riot but it quickly became clear that it was way ahead of my technical facilities. My PC was a respectable DOS based 486 with a good VGA card. Strangely enough I could imagine, model and render but I could not really output.

With 3D Studio I could render animations in the Autodesk FLIC file format in a resolution of 320×200 pixels and 256 colours. Using the included aaplay.exe I could play them on, almost, any reasonable PC. This was pretty limiting but worked. Render times were glacial. Two days to calculate a short animation was not unusual.

The 3DS could also render still images in the more impressive TGA file format. This could store much larger resolution images and effectively unlimited colours. Unfortunately the TGA files were single images not animations. The normal work flow was to purchase a special video card and a professional Video Tape Recorder that could record frame by frame. These frames, when played back at 24 per second, would constitute a full broadcast quality computer animation. This was a serious investment which I would have made had I found a proper revenue stream.

One of my projects was an advert for GALE FORCE Jeux, my computer games mail order business. I put this on to VHS video tape by using a VGA to PAL convertor and a normal video recorder. The quality was not so good. I did send a tape to a MICRO KIDS, a computer games show on the national French FR3 channel but heard nothing back. I guess they never used it. Strangely enough I actually met the MICRO KIDS presenter Jean-Michel Blottière a few years later at Imagina. He didn’t recall my tape. . . . . .

For me the first market to look at was graphics for TV and adverts at our local cinema. I never really had a proper answer from our local TV station. The local cinema was sort of interested but I would have to transfer my animations to 35mm film which was not an option without buying a massive piece of hardware.

I made many demo’s for my business clients hoping for some work with trade shows but nothing stuck.

At the time many of our clients were in the Yacht Management and construction business so, for fun, I animated how I thought yachts should be delivered.

I made a demo for Keke Rosberg’s local Formula 1 business for visualising the adverts on cars. I showed how I could make a virtual F1 car with virtual stickers as an aid to their presentations. Unfortunately they were content to stick with their paper and sticky tape solutions.

I made a demo for the Monaco Automobile Club which I thought was brilliant for the time but unfortunately lost a lot in the presentation due to the limits of my PC. My idea was for a sequence of Monaco based animations to play on the big screens during down time at the Monaco Grand Prix. Unfortunately the Automobile Club were not interested.

At the time I was also a very active member of the local Monaco Amateur Drama Group. In my archives I found the following sequence that I made as the title for a video of one of their performances.

By 1996 the Internet business was well underway and shooting off in all directions. One of these off shoots was my new status as the developer and host of the Official Monaco Government Tourist Office of New York website. As part of this project they asked me to make a short animation for one of their trade shows. Finally paid animation work ! It might not look much these days but back in the day this sequence was a real eye catcher.

So unfortunately I never found a serious revenue stream that could justify the purchase of a professional video or film system. The animation business faded into the background when my Internet Access experiment gained traction and and became a real money earner.

I think it was in 1998 when I started chatting with one of our Internet clients who was fascinated by my Silicon Graphics WebForce server. He was experimenting with a Silicon Graphics O2 workstation and the animation program Alias Maya running on it. We started having regular brain storming meetings and were eventually joined by a couple of local venture capital guys. Our core idea was to build a local animation and visual effects studio. Being in the South of France we figured we were in an ideal position to attract some of the best talent in Europe. I don’t remember where the plan stalled but for a while it was looking like a really serious new venture.

Alias Maya and the O2 was technically a massive step up from 3D Studio but unfortunately came at a time when my Internet business was expanding exponentially so I didn’t really have much experimental time. I do remember being fascinated by the MEL programming language inside Maya. By using Inverse Kinematics and MEL I created a program to make 4 legged animals perform a reasonably good run cycle. This was quite a challenge in those days. I did imagine a possible revenue stream writing software to automatically animate models. Unfortunately I cannot yet find any copies of my work from the O2.

I think it was in 2002 that I discovered LightWave 3D. I suspect I saw an Imagina session about the Jimmy Neutron animated film which had been made entirely in LightWave. I purchased the new LightWave 3D version 7. I remember building “realistic” human faces from scratch with LightWave. Looking through my archives I have found a great number of LightWave lwo files but very little rendered out. You can see a couple of examples I did find in the slide show below.

For your interest the technical requirements to run Lightwave 7 were a Pentium II 266 processor, Microsoft Windows NT4 or 98 and 128MB of RAM.

It seems I was also still researching the possibilities of placing adverts on virtual cars as you can see by the following very short video test:

Eventually it seems that, again, I ran out of “experimental time” due to the Internet project so in the end I have little to show for my time with LW7.

And Finally ….. The future is Blender

Some time much later I came across the amazing, fantastic, wonderful, impressive, free, Blender 3D program which I now use for just about everything 3D. Much of my Blender work is covered by my other Blog stories.

So that short story ended up being my personal history so far in the world of 3D computer modeling and animation. It is a world that still fascinates me so I am sure there is more to come when I move into the Metaverse with my Oculus Quest 2.